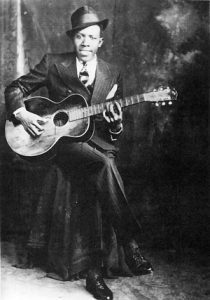 Robert Johnson was considered the King of the Delta Blues and the Grandfather of Rock n Roll. He was a singer, songwriter, guitarist and harmonica player. Johnson had little commercial success but was deeply influential, of mythic proportions, including a tale that he sold his soul to the devil at a Mississippi highway to achieve success at the “crossroads.” Johnson influenced Keith Richards, Bob Dylan, Jimi Hendrix, Eric Clapton, Fleetwood Mac and many others.

Me and the Devil Blues

Hellbound on my Trail